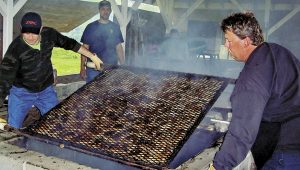 Driver Ruritan Club members Jeff Ward and Paul Long rotate a grate of chickens during the club’s annual chicken dinner fundraiser, at Berea Christian Church Saturday. With an influx of new members, things are looking up for the club.

After talk of shutting down due to dwindling membership, the future looks brighter for Driver Ruritan Club following a much-needed infusion of new blood.  Having dwindled to only six members, the community service club’s ranks were recently bolstered with 21 fresh faces, said Bill Wulfkuhle, its president.

The new members are all from Cub Scout Pack 89 and Boy Scout Troop 16, both of which are based out of Driver’s Beech Grove United Methodist Church, he added. Wulfkuhle is also involved in both Cubs and Scouts groups, which rely on the Ruritans for support. “I just kept pushing the leaders to join,” Wulfkuhle said. “I just kept hitting the guys up, saying ‘We need help, we need help. We want to sponsor things for you, but we need help.’” The effect of the Ruritans’ revitalization was clear at its annual chicken dinner fundraiser Saturday, said Angela Harris, the club’s treasurer. “The last few years, we weren’t able to sell out our barbecue chickens, and this was the first year in probably three or four year were able to accomplish that,” she said. Whereas about 280 half chickens were left over in 2012 — though Berea Christian Church took a lot of them half price — this year the full order of 332 sold, she said. “It was pretty scary when we put that order in,” Harris said. “When people were coming up to me and saying, ‘I’ll take a chicken,’ I was jumping up and down. The new members had no idea. It was a wonderful feeling.” The new members include a couple of high- and middle-schoolers and their parents, Harris said. According to a delighted Wulfkuhle, the new members are breathing new life into the club, which plans to resume funding a scholarship for a Nansemond River High School senior and sending kids to camp.

“We are back in business, trying to raise funds,” Wulfkuhle said. “We’ll keep growing and be able to do more fundraisers. We’re throwing around ideas, things like selling pre-packaged sausage and another chicken dinner.” The club also looks forward to again providing games during the Driver Days village festival in October, including the popular dunk tank, he said.A lot of the club’s previous members were elderly, according to Harris. “They got sick and weren’t able to come to the meetings. “Then we had a couple of families in the military who were transferred to Georgia.” Since she has eight children herself, she said, Harris understands that modern families can be hard-pressed to find time to participate in groups like the Ruritans.

The club’s regular meeting has been rescheduled to the first Wednesday of the month to avoid a calendar clash with the Cub Scouts, she said.

Published in the Suffolk News Herald 22 May 2013