Robert “Bob” Ray Pocklington, 88, of Suffolk, VA passed away on February 28, 2014. A native of Algonac, MI he was the son of the late Harold Lee Pocklington and Clara Viola Lenzner. He served in the U. S. Army during World War II as a Combat Engineer. Bob was a Financial Consultant at New York Life Insurance Company, a member of the Chuckatuck Ruritan Club and past president of the Algonac Lions Club. He was an enthusiastic fisherman, painter and gardener and he was very proud of his gorgeous daylilies. Bob enjoyed writing for his blog “Inside Suffolk.”

A Celebration of Life Service will be held on Tuesday, March 4, 2014, at 4 p.m. at Parr Funeral Home and Crematory. Friends may join the family for visitation from 3 – 4 p.m. prior to the service. Memorial donations may be made to the American Cancer Society, 4416 Expressway Drive, Virginia Beach, VA 23452 (earmarked for: Suffolk Relay for Life). Condolences may be registered online at www.parrfuneralhome.com 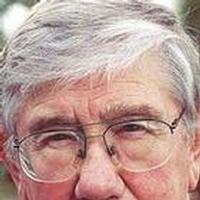