William “Jerry” Gerald Saunders, Sr., 74, passed away September 25, 2014 in Sentara Norfolk General Hospital. He was the husband to Iola Holland Saunders, and the son of the late Harvey F. and Carrie B. Saunders, Sr. Jerry was a member of Oakland Christian Church in Chuckatuck. After graduating from Chuckatuck High School, he went into the U.S. Air Force and served for four years. Jerry was the 3rd Fire Chief for the Chuckatuck Volunteer Fire Department CVFD and had 17 year tenure as Chief. He missed being a charter member of CVFD by only a few months. He joined in 1954 at the age of 16 and was a Life Member with 60 years of service. The morning of going into the hospital, Jerry was out on a call with the Chuckatuck Volunteer Fire Department. He was a member of the Chuckatuck Ruritan Club, and a charter member of the Suffolk Police Auxiliary Unit with 20 years of service. Jerry was also active in Boy Scouts Troop 25 and several other civic organizations. Besides his loving wife, Iola, Jerry leaves behind his daughter, Wendy Jo Spain; son, Jay Saunders and wife, Chelsea, of Suffolk; grandchildren, Nicholas, Meredith and Jamie Spain; brother, Harvey Saunders and wife, Jackie; and sister Peggy Garvey and husband, Bill. A funeral service will be conducted on Monday, September 29, 2014 at 2 PM at Oakland Christian Church, 5641 Godwin Blvd, Suffolk, VA 23432 by the Rev. Greg Ryan. Burial will follow in the Church Cemetery. The family will receive friends in the R.W. Baker & Co. Funeral Home and Crematory, 509 W. Washington St., Suffolk, VA 23434, on Sunday, September 28, 2014 from 6 to 8 PM. In lieu of flowers, memorial donations may be made to the Chuckatuck Volunteer Fire Department, P.O. Box 2164, Suffolk, VA 23432. Condolences may be registered at www.rwbakerfh.com. 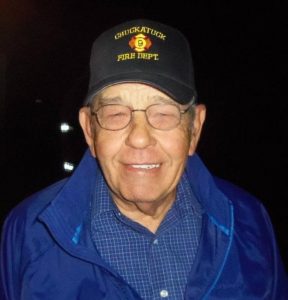