John Halligan Clements, 83, of Carson, Virginia, and a native of Dinwiddie County passed away on October 21, 2014. Born on December 20, 1930, John was the son of the late Ruth Amanda Halligan Clements and John William Clements; and was also preceded in death by his wife, Lillie Pittard Clements; and a sister, Gwendolyn Clements McCann. He is survived by his daughters, Martha Carrington Clements and husband, Malcolm Warneford-Thomson, and Kimberly Anne Clements; one son, John Peter Clements and wife, Jennifer H. Clements; grandchildren, John William Clements, II, John Christopher Avellana, James Halligan Clements, Susannah Bishop, Robert Warneford-Thomson and Agnes Warneford-Thomson; one daughter-in-law, Patricia B. Clements; a niece, Cheryle Gwendolyn McCann; and one nephew, Dr. Merle Clements McCann. John was a devoted Christian and member of Carson United Methodist Church, where he spent his entire life supporting the mission of the church. He spent many years as District Lay Leader and District Steward on the Petersburg (now James River) District and supported many of the church’s initiatives, most notably United Methodist Family Services (UMFS). John lived by the commitment of his time, talents, gifts and service to his Heavenly Father. John had a long and accomplished career in business, first running his family farming operation, and then the family general store, P.B. Halligan Co. Inc., named for his grandfather Peter Bernard Halligan. John was elected to the Board of The Bank of Southside Virginia in 1966 and Chairman of the Board and CEO in 1977. He was named President in 1983. His career in banking was notable as he was elected President of the Virginia Bankers Association in 1989. John also served key positions in the American Bankers Association serving on the Community Bank Council and Government Relations Committee. After graduating from Dinwiddie County High School, John went on to become a proud 1952 graduate of Randolph-Macon College in Ashland where he was a member of Phi Kappa Sigma Fraternity. Many of his best friends today were fraternity brothers with him at Phi Kapp those early years. John was active in every aspect of the college from his freshman year until now. He served 16 years as a Trustee, the last 10 years being Chairman. John was a proud and honored member of the Carson Ruritan Club for over sixty years. He rose through the Holland District ranks to District Governor in 1965 and served several terms as a National Director. He made many friends in Ruritan National whom affectionately named him “Captain Crow” which was his club nickname. He adopted the Ruritan motto of Community Service, Fellowship, and Goodwill and practiced it every day of his life. John served on numerous State Boards and Commissions including service as the first banker ever appointed to the Treasury Board of the State of Virginia under Governor Allen. He served as Chair of the Social Services Board of the State of Virginia as well as terms on the Department of Housing, Department of Forestry, State Compensation Board and many others. At home, he helped establish the Dinwiddie County Water Authority, and became one of its first and longest serving appointees. He was a longtime member of the Dinwiddie County Electoral Board. He personally donated the land and building for the Carson Depot Library branch of the Appomattox Regional Library System in 1991 and helped fund its restoration as well as that of the Caboose that sits beside it. He also established an endowment for the Library System. He served as the first President of the Carson Fire Department in 1963. He served seventeen years on the Hospital Authority for what is now Southside Regional Medical Center, including several terms as Chair. He was a key part of the sale of the hospital and the resulting Cameron Foundation that is now one of the major sources of philanthropic donations into its service area. The family would like to express their deep appreciation to all of the healthcare professionals at St. Mary’s, VCU Medical Center, Virginia Cancer Institute and Partner MD. The family will receive friends from 2:00 pm to 5:00 pm on Sunday, October 26, 2014 at the Halligan Clements home in Carson. A funeral service will be conducted at 11:00 am on Monday, October 27, 2014 at Carson United Methodist Church, 17407 Halligan Park Rd., Carson, VA 23830. Interment will follow in Blandford Cemetery, Petersburg, VA. In lieu of flowers, memorial contributions may be donated to the Carson UMC Building Fund, c/o Carol Chapell P.O. Box 40, Carson, VA 23830 or the John H. and Lillie B. Clements Scholarship Fund at Randolph Macon College, P.O. Box 5005, Ashland, VA 23005. The family is being served by the Petersburg Chapel of J.T. Morriss & Son Funeral Home. 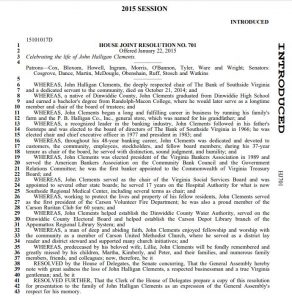