The family of Judge William Wellington Jones announces his passing on Sunday, January 25, 2015.

Judge Jones was born in Portsmouth, Virginia on December 30, 1921 to Roy and Margaret Jones of Driver, Virginia where Judge Jones lived for most of his life.
After graduating from Chuckatuck High School, Judge Jones went on to graduate from William & Mary College where he later received his law degree. During WWII he served as a lieutenant in the Navy. His marriage to Elizabeth Hill Jones produced two children, William Wellington Jones, Jr and Mary Margaret Jones.
Judge Jones was twice appointed as judge. He also served as the Commonwealth Attorney for the city of Suffolk. He was a member of many of the local clubs and organizations holding fond memories for the Driver Ruritan Club of which he was a life long member.
He is survived by his daughter, harpist Mary Margaret Jones and only grandson, Francesco Bruno-Bossio. All other family members have pre-deceased him.

Memorial contributions may be made to Carolina Poodle Rescue, www.carolinapoodlerescue.org, in memory of his dog Celine who was stolen from him in February 2014 or to Family Choice Funerals & Cremations for private funeral and burial now pending financial arrangements. 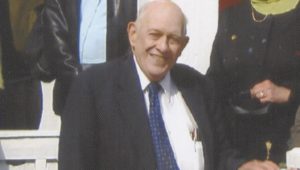