Edward Bassett Ashby, Jr., 91, of Disputanta passed away peacefully Sunday, June 14, 2015 at Waverly Health and Rehabilitation Center. Born on November 16, 1923 in Southampton County, he was a son of the late Edward B. Ashby, Sr. and Wilma Sizer Ashby. Along with his parents, Mr. Ashby was preceded in death by his devoted wife of 61 years, Janie M. Ashby and his brothers, Bailey S. Ashby and Frederick B. Ashby, Sr. White attending VPI, Mr. Ashby was drafted into the US Army during World War II where he proudly served his country. He was a retired farmer who served as a Director on the Soil and Water Conservation Board for his district for 50 years. Mr. Ashby was also the last living founder of the Prescription Fertilizer and Chemical Company. He was one of the oldest members of Waverly Baptist Church where he served as Sunday School Superintendent and Sunday School teacher. He was also a member of the Waverly Ruritan Club. Left to cherish his memory is his daughter, Kathryn A. Brockwell and husband, H.B. Brockwell of Lawrenceville; his son, Edward B. Ashby III and wife, Penny M. Ashby of Manteo, NC; his loving granddaughters, Katie B. Matthews and husband, Dan Matthews of Warfield, and Kerri Jane Brockwell of Lawrenceville; his beloved great-grandsons, Daniel Matthews and Ashby Matthews; his brother, Dr. Charles C. Ashby and his wife, Martha T. Ashby of Dinwiddie. The family will receive friends Tuesday, June 16, 2015 at R.W. Baker & Co. Funeral Home Wakefield Chapel from 6:00 to 8:00 pm. A funeral service will be held at 11:00 am Wednesday, June 17, 2015 at Waverly Baptist Church. Burial will follow at Waverly Cemetery. lieu of flowers memorial donations may be made to Waverly Baptist Church, P.O. Box 12, Waverly, VA 23890. Condolences may be posted at www.rwbakerfh.com. 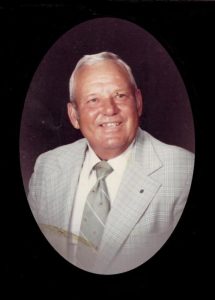