Robbie F. Owen, 85, of Wakefield, Virginia died Wednesday, June 15, 2016 following an accident while maintaining his beloved farm, Shannamoor. Born in Townsend, North Carolina in 1931, he was a son of the late Willie and Mary Owen. Robbie attended Campbell College and graduated from Virginia Tech in 1954. He served in the U.S. Army as First Lt. from 1954-1956. Robbie was a member of Wakefield Baptist Church for 50 years where he was a Deacon and on the Board of Trustees. He was on the Sussex County Board of Supervisors from 1972-1992, and 1996-2000; on the Board of Directors of the Ivor Rescue Squad; a member of the Wakefield Ruritan Club where he served as past President and was a past Ruritan of the Year; and served on the Sussex County Social Services Board. Along with his parents, he is preceded in death by a brother, Dwight Owen; a sister, Peggy Owen Unger; three nephews and a great-niece. Robbie was a successful businessman who founded Wakefield Farm Service, Inc. in 1965. He loved his family, Virginia Tech football, his farm, his employees and customers, Wakefield and Sussex County. Robbie was a loving and devoted husband, father, father-in-law, brother, grandfather, great-grandfather and friend who will be missed by all who knew him. Left to cherish his memory are his wife of 60 years, Sara Elizabeth “Betty” Cantrell Owen; sons, Stephen F. Owen Shelby Ochs Owen and David T. Owen Lisa Seward Owen; grandchildren, Graham Owen Nathalie, Emily Owen, Samuel Owen, Ashley Brock Graham and Erin Seward Brandon; great-grandsons, Owen Brock and Camden Seward; and sisters, Janet Jones of Buffalo Junction, VA, and Beulah Simmons Bobbitt of Aberdeen, N.C. A memorial service will be held at 2:00 pm Saturday, June 18, 2016 at Wakefield Baptist Church with Rev. Carter Dey officiating. In lieu of flowers, memorial donations may be made to Wakefield Baptist Church, P.O. Box 567 Wakefield, VA 23888, Waverly Rescue Squad, P.O. Box 583 Waverly, VA 23890, or Ivor Rescue Squad, P.O. Box 228 Ivor, VA 23866. R.W. Baker & Co. Funeral Home and Crematory is serving the family. Condolences may be registered at www.rwbakerfh.com. 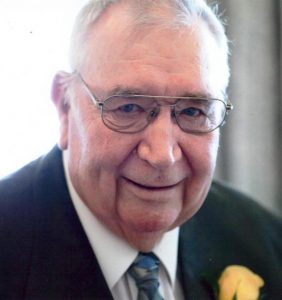