Billy Lee Twine, Sr., 84, passed away November 20, 2017.  He was born in Greensboro, NC the son of the late Thomas C. and Maude T. Twine.  He was predeceased by his wife of 56 years, Lottie Johnson Twine; his sister, Ruth Twine Byrum; and brothers, Hillary and Charles Twine.  Billy was a retired United States Air Force Veteran having served during Vietnam.  He later went on to work and retire as a mechanic for the Virginia Department of Transportation.  He was a member of Liberty Baptist Church for 45 years where he was a deacon and actively served throughout his time there.  After moving to Williamsburg, he became a member of James River Baptist Church.  Billy was a lifelong Magnolia Ruritan member and served as a Zone Governor.

A funeral service will be held Saturday, November 25, 2017 at 3 p.m. at Liberty Baptist Church with Pastor Mark Reon officiating.  Burial with full military honors will be held Tuesday, November 28, 2017 at 1 p.m. at Albert G. Horton, Jr. Memorial Veterans Cemetery.  Memorial donations may be made to Liberty Baptist Church or the American Cancer Society.  Condolences may be registered online at www.parrfuneralhome.com. 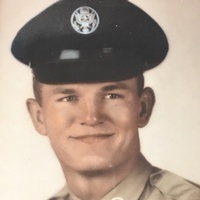