The Holland District Ruritans recently gathered together for their annual District Convention with over 150 members in attendance at the Franklin Workforce Center.  The Ruritans from across district came together to celebrate their accomplishments for their prospective communities from 2017; train club officers for the coming year and elect district officers.  An enjoyable day was had by all.

Resolutions of Appreciation were presented to:  Franklin Workforce Center for the outstanding hospitality and willingness to work with the district to have a successful event; Nan York, 2017 Holland Governor for his devotion and service to the district; Past District Governors who had passed away during the year and Lenward Hedgspath, who served as the Holland District National Representative.  Each was unanimously approved by the group and were given a standing ovation.

Phillip Bradshaw of the Carrsville Club was elected as the Holland District Governor.  Phillip joined Ruritan in 1980 where he has been a role model for Carrsville members; shared his leadership in the roll of President for several terms and served the club for many years as Treasurer.  He has also worked for the Holland District as Lt. District Governor during the 2017 year and previously as the Lt. Zone Governor and Zone Governor.  Mr. Bradshaw lives by the motto of “Some men see things as they are and ask why, I dream things that never were and ask why not“.

Mr. Bradshaw has set three main goals for the Holland District Ruritans for the 2018.  They are:   improve communication through the development of the District Website; developing leadership for the District and Zones in order to support individual Clubs; and aiding the Holland Ruritan Club with the Celebration of the 90th anniversary of the founding of Ruritan during Founders Day in May.  He will be using the theme for the year “Working Together, We Can”.

When asked what his favorite memory in Ruritan is, Mr. Bradshaw responded when his daughter, Kateland received the Tom Downing Award which is the highest award a Ruritan can receive.  Miss Bradshaw received this award during the 2017 Holland District Convention.  Kateland is a fourth generation Ruritan Member and she was also the first Ruritan Youth Member of the Carrsville Club.  Kateland enjoys working with small children and excels in the area of seniors and cooking. 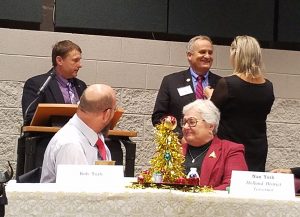 Stella Bradshaw pins Phillip after being elected the Holland District Governor for 2017. 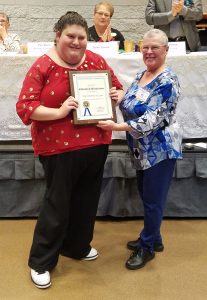 Kateland Bradshaw receives the Tom Downing Award and is presented by Pat Davis.