Jim Sampson of the Greensville Ruritan Club was named the governor of Holland District Ruritans on Saturday afternoon. This induction took place during the annual convention in the Regional Workforce Development Center at Paul D. Camp Community College.  Guests for the occasion included Ruritan National President Guy Cox and his wife, Linda, of West Virginia; and Holland Ruritan National Director Linward Hedgspeth and his wife, Anne.

Previous to the swearing-in ceremony, Phillip Bradshaw made remarks as the out-going district governor. “We are volunteers for community,” he said, “By giving of yourself you gain life and knowledge. “Continuing to work together, we an accomplish anything. We are a tremendous organization and we’re going to continue to be strong.”

Bradshaw thanked Sampson for “stepping up” to the leadership role ahead, and continued, “I think about vision all the time. Some men ask ‘Why?’ I see things and ask ‘Why not?’ We have to know our talents, develop and use them.” Bradshaw concluded by encouraging fellow Ruritans to simply ask other people to join. Gifts of appreciation for his service were then bestowed on him. He’ll continue to serve on the cabinet as a past president, and remains treasurer at the Carrsville Ruritan Club to which he belongs.Following his remarks, Nancy Clayton of the Possum Hollow Ruritan Club in Isle of Wight/Suffolk received the Ruritan of the Year honor with emotion and gratitude.

This honor goes to a Ruritan who has gone above and beyond in service to the community which it serves. George Winslow, club president, was with her at the presentation. Sarah Bazemore was named the 2018 Ruriteen of the Year. The daughter of Tommy and Karen Bazemore, she is a member of the Lakeland High School Ruri-Teen Club in Suffolk. Ashlyn Sampson, daughter of Jim and Marsha Sampson, was named the 2018 Rudy Youth of the Year. She also was a scholarship recipient. After being sworn in by Bobby Wrenn, himself a former national president, Lt. Gov. Jim Sampson addressed fellow Ruritans and guests as the new district governor. He first noted there has been “huge amounts of growth” in the eight club within the district. Sampson joked that he “blamed” Wren for getting him involved in Ruritan more than 15 years ago. “I bit the hook,” Sampson said, and thanked Wren for his mentorship. “The more I became involved, the more I realized Ruritan is such a strong organization.” To further build membership, he encouraged the clubs to bring in more women. “We’ll open the lines of communication to move forward,” Sampson said. 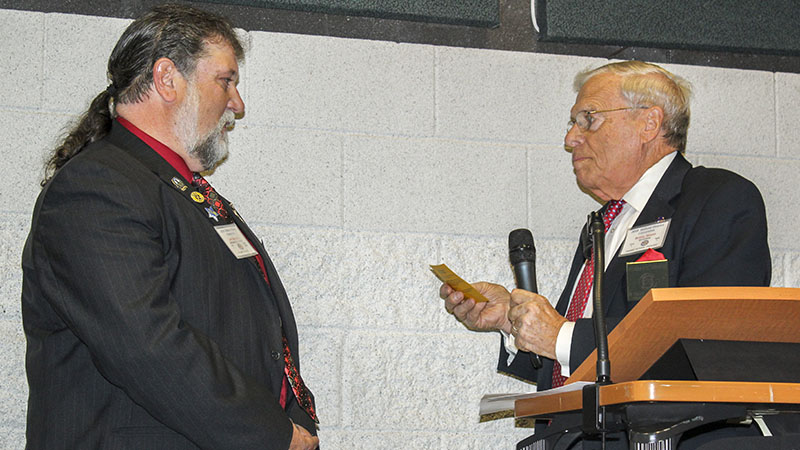 Jim Sampson of the Greensville Ruritan Club, left, is sworn in as the new district governor of the Holland Ruritans. Officiating at right is Bobby Wrenn, who is also from Greensville, is a former national president.