Larry Richard Santure passed away on 25 January 2020.  He was born in Ypsilanti, Michigan and was the oldest of the late Richard and Catherine Santure.  Larry was a retired United States Army Major having served during Vietnam, Korea and Panama.  While in the military he served as a senior advisor to the Commander in Chief, Atlantic Command for Foreign Military Assistance, as the Executive Officer of the 210th Avn Battalion, as the Operations Officer for the Army’s Foreign Assistance Agency and as the Commanding Officer of 114th Avn Company.  After retirement from the Army, he served as Senior Business Manager (Country Meats) and Senior Vice President of Smithfield Companies (V.W. Joyner) in Smithfield.  He was a member of St. Therese Catholic Church, the Suffolk Ruritans Club, Elks Lodge #685, and the Quiet Birdmen Club in Norfolk, VA.

Larry achieved Master of Science Degrees from Central Michigan and Campbell University.  He was also an amateur archaeologist who also enjoyed developing his Teak and Mahogany farm in Panama.

A funeral service will be held on Friday 31 Jan 2020 at 11 a.m. at St. Therese Catholic Church with Rev. Kevin J. O’Brien officiating.  Friends may join the family for a time of visitation one hour prior to the service from 10-11 a.m. at the church.  Burial with full military honors will be held at 3 p.m. at Albert G. Horton, Jr. Memorial Veterans Cemetery.  Memorial donations may be made to the Horton Wreath Society at P.O. Box 6246, Virginia Beach, VA 23456-0246.  Condolences may be registered online at www.parrfuneralhome.com. 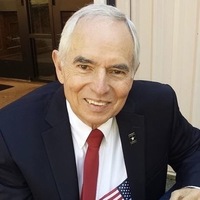