Capron – James Earl ‘Jimmy” Glascock, 65, passed away March 27, 2020 in Southampton Memorial Hospital. Jimmy was a son of the late James Marcellus Glascock and Bertha Kallam Glascock and was also predeceased by a brother-in-law Joe St. John. He was born in Farmville, VA and grew up in Green Bay, VA. He was a 1972 graduate of Prince Edward Academy and a 1977 graduate of Virginia Tech where he was a member of the Phi Delta Theta Fraternity.  He attended Boykins Baptist Church and had been a member of the Boykins Lion Club and Newsoms Ruritan Club. Jimmy had retired after 27 years of service as the Executive Director for the Farm Service Agency of Southampton County.

A private graveside service will be held at Liberty Christian Church Cemetery, 149 Green Bay Rd., Green Bay, VA. The family suggests that in lieu of flowers memorial donations may be made to the charity of one’s choice. 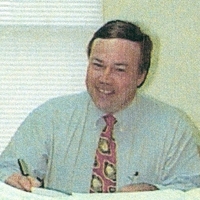