Marvin Russell Seaman, beloved and devoted husband of Alice, died peacefully at home on October 1, 2021 with family by his side, three weeks before his 95th birthday. He was born on October 20, 1926 in St. Louis, Missouri to parents, Rena Belle and Arthur Campbell Seaman. He grew up in South Bend, Indiana. He was predeceased by two brothers, William and Ralph; and sister, Harriet Damianakes.

Marvin graduated from John Adams High School in South Bend. He attended the University of California, Berkeley. He also attended the College of William and Mary, Norfolk Division. He retired from the U.S. Navy where he served during WWII in the South Pacific. He was a plank owner of LST 725. He participated in the battles of Okinawa and Iwo Jima. Later he served on the aircraft carrier USS Hornet. He was stationed on Guam, in Naples, Italy, Treasure Island and the Norfolk Naval Base with his wife always by his side. He retired as a senior chief petty officer in 1965 and enjoyed a second career with Ford Aerospace, now Lockheed Martin, where he was employed as a systems engineer. A three-year assignment in England preceded his retirement in 1988. He and his wife enjoyed extensive travels visiting many foreign countries and territories as well as our National Parks.

Marvin took every opportunity to spend time with his beloved grandchildren. He was an avid reader and enjoyed over 54 years at Holly Loch, their home on the quiet Chuckatuck Creek. He loved the Navy and was always eager to share his stories with one and all.

A memorial service is planned for Saturday, October 16 at 11 AM at St. John’s Episcopal Church in Chuckatuck. Weather permitting, it will be held at the altar by the pond. A reception will follow on the lawn. His internment will take place at Arlington National Cemetery. In lieu of flowers, memorials may be made to St. John’s Church or a charity of your choice. www.SturtevantFH.com 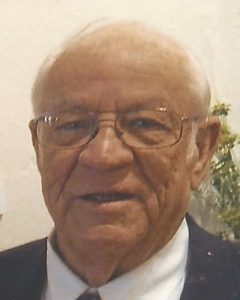 Oldest Chuckatuck Club Member at the time of his passing.