SUFFOLK – Carl “Bruce” Rideout, 68, of Suffolk, passed away peacefully on Friday, Jan. 7, 2022, in Jacksonville, Florida, after battling cancer through a bone marrow transplant at the Mayo Clinic. Bruce was a loving husband, father and friend. He was predeceased by his parents, Robert Waverly and Alma Vaughan Rideout.
Left to cherish his memory are his loving wife and caregiver Tricia; daughter, Kimberly Rideout; grandson, Cameron Rideout; granddaughter, Carley Rideout; big brother, Robert W. Rideout (Judy); little sister, Ruth Whitley (Ed); cousin/twin Angelia Smithwick; nieces, nephews, cousins and a lifetime of old and new friends.
Bruce never met a stranger. He was fun to be around and always had a way of turning out a joke.
Bruce grew up on a farm in Isle of Wight County and frequented his grandparents farm in North Carolina. He learned from a young age what hard work was all about. Growing up, he learned how to fix things. He enjoyed working on cars. The faster, the better. The louder, the better. He liked his music and TV loud too.
Bruce was a Class A mechanic who worked “over to the mill” at Union Camp Corporation (later I.P.) from 1971 until 2000. He carried a toolbox for many years, learning from the old-timers how to keep the machines working to make paper. He became a jack of all trades. After many years as a mechanic, he became an industrial truck operations trainer and trained others to operate specialized equipment.
In 2000, he encountered his first battle with leukemia (AML). Through God’s grace, he was blessed with 20 years as a cancer survivor. Over these years, he would enjoy “retirement,” spending time with his family (especially his grandchildren), friends (bikers and all) and community. He enjoyed driving his Chevy SSR and riding his Spyder motorcycle.
He enjoyed meeting new people through riding motorcycles across the country and hosting friends at his home to “hideout” or play pool. In his last years, he loved to ride his golf cart around his farm, hunting groundhogs, feeding his beloved squirrels and neighbors’ goats and visiting the neighbors.
Bruce was a member of the Carrsville Ruritan Club. He enjoyed the fellowship, friendship and serving the community. He also enjoyed honoring his father by giving meals to those in need at Christmas. Bruce was proud of his heritage. He was a member of the Sons of Confederate Veterans, Urquhart Gillette Camp No. 1471, serving as Quarter Master and Confederate Store Operator. He was also a member of the Sons of Confederate Veterans Mechanized Calvary. He enjoyed educating people about the war of the northern aggression.
A celebration of his life will be on Saturday, Jan. 29, at 2 p.m. at Beaver Dam Baptist Church where he was a member with the Rev. Warren Johnson officiating. The family will receive friends at the church Fellowship Hall after the service. In lieu of flowers, the family requests memorial donations be made to the Carrsville Ruritan Club. 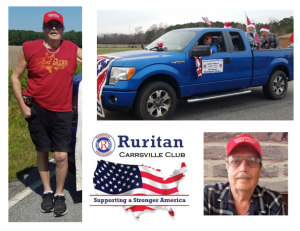